Chart boppers that will get you through the week 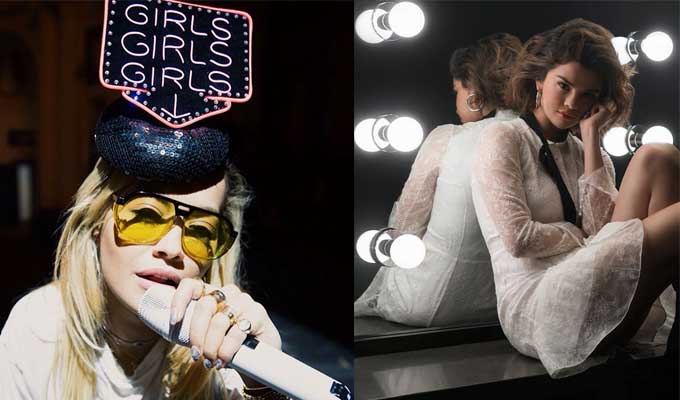 It’s only appropriate that Rita Ora finally releases her new single “Girls” ahead of the opening night of her sold out “Girls European Tour”. The epic pop collaboration hears her teaming up with some of pops biggest female names including Cardi B, Bebe Rexha and Charli XCX.

This song has been circling the web for over a year after Rita and Charli both performed it at festivals and lets just say the live versions didn't do this song justice because it is a bonafide bop.

After the first listen you will be left feeling all giddy and empowered with its cute production and message. It’s about embracing and celebrating strong women and bisexuality in such a ‘in your face and exciting way’. The chorus is literally “Sometimes I just wanna kiss girls, girls, girls” and I am living for it because it’s such a mainstream pop song that will undoubtedly get a lot of radio airplay and these are the sorts of messages we need to be hearing on the radio. We live in such a dark world right now where people are starting to tell us again that it’s not okay for us to be who we are and it’s songs like this that encourage people to take a stand and to be proud of who we are.

I was a bit worried that with so many vocalists on one track that not everyone would get time to shine but everyone seems to have their moment. The only person that seems to slightly fade into the background is Bebe Rexha but that’s sadly because she seems to have received the weakest verse. But as a whole, the track is just so euphoric, fun, flirty and empowering. I mean what else could you want?

SINGLE REVIEW: Didirri - I Can’t Get Last Night Out Of My Head

Whilst Didirri has just wrapped up his mostly sold out Australian tour and is about to kick off a massive European tour, the Melbourne singer-songwriter has decided to release a captivating new single to get you all emotional. “I Cant Get Last Night Out Of My Head” is taken from his debut EP “Measurements” which will be finally released on July 6 and is yet again a very emotional and candid track.

He reflects on the rekindling of an old flame the night before he went to the UK on his last tour and how he knows he shouldn't have but was so caught up in the moment. Lyrically the song is quite simple but it’s very effective with his angelic harmonies and the use of repetition.

The chorus hears him proclaiming “I can’t get last night out of my head. I don’t want to spend a single night in my own bed” in an euphoric and desperate nature. While in the bridge he admits in a state of vulnerability “I bruise easily” where he is scared that he will get hurt again. The production begins acoustically with only a guitar and gradually builds with the addition of percussion before adding in strings, piano and a gospel inspired final chorus. This is his biggest and boldest moment yet as an artist, and it’s so exciting because whilst it is an epic and radio ready song, he also doesn't compromise who he is as an artist. It’s still as vulnerable, honest and beautiful as his previous material but just shows a growth in his songwriting and production.

SINGLE REVIEW: Selena Gomez - Back To You

It’s the Netflix sequel that really didn't need to happen but as of next week Season 2 of 13 Reasons Why will be available to stream and will undoubtedly have everyone talking again. Selena Gomez has returned as one of the executive producers and this time she’s releasing an exclusive single to promote the soundtrack.

“Back To You” is a simple love song about being in love with someone and always running back to them regardless of the fact that they may hurt you over and over again. The mid-tempo ballad is already rumoured to be about Justin Bieber because of their on and off again public relationship, which perfectly fits into the storyline of this song.

This is one of Selena’s most candid and honest lyrical moments and I can’t help but wish the production was stronger to embody just how special this song is. Instead it’s a bit bland and takes a couple of listens to really appreciate. The production structure is also a little bit too similar to her Kygo collaboration “It Ain’t Me” with the same guitar chords driving the song. But it’s all right and is a cute little moment for Selena to show everyone that she is maturing more as an artist and continuing to open up to her listeners.

Childish Gambino is someone I’m convinced doesn't sleep. Like, I legitimately think he’s a robot because he seems to do everything and has 500 projects running at once and some how manages to still tour and make music. And on top of that, he even has time to drop surprise singles and music videos like the incredible “This Is America”, which you will soon become obsessed with.

I don’t feel like I need to say much about this song because it really does speak for it self. The politically driven track addresses black lives in America and as apart of their culture in general. The music video also addresses America’s fascination with guns and how they are more protective over the machinery than the victims. It’s a very politically awakening song that makes you stop and think, and want to blast it loud so other people can hear it and its powerful message. The brilliant thing is that he manages to deliver all these messages in a respectful way as well as make it catchy, engaging and memorable without it being gimmicky. It’s whole-heartedly an incredible song and one of the most important releases of the year so far.

Noah Cyrus has seemingly continued to release strong pop song after strong pop song and hasn't showed any signs of slowing down. But her new single “Team” is her weakest release yet, as it awkwardly sits between being an emotive ballad and being too cheesy and generic. The potential is there for this to be a breakthrough mature pop ballad moment for the songstress but instead she allows it to dive too far into the cheesy meme territory.

I’m not sure if that’s meant to be the gag, because the single artwork certainly plays on that, even if it is it still makes you feel slightly uncomfortable. With the lyrics as honest as they are I wanted this to be heartfelt and touching and the first verse delivers that perfectly. However as soon as the chorus strikes along with the harmonies with Max you can’t help but cringe. “So whenever you're losing, I’ll celebrate ya, appreciate ya, I’ll get you up on your feet”. The lyrics are super cute and will have you wanting to have someone you can sing “I’ll always be on your team” too but the rest of the song is a bit of a mess.

The production is very average and the harmonies could have been strong. But it must be noted that Cyrus’ vocals were very honest and strong during the verses and this is more of the artist I want to hear.

Meghan Trainor is ready to prove herself as a real pop contender with her forthcoming third studio album which is shaping up to be a collection of groovy tracks. The “All About That Bass” songstress has noticeably grown since her debut and has injected a sexy and mature RNB-pop sound to her delivery.

“No Excuses” further explored the sound her sophomore record introduced and for her next two singles she's heading towards a more disco tinged direction. “Let You Be Right” is the clear standout of the two singles with its groovy beat that drives the whole song. It’s about stepping down from a fight with a loved one in fear that you may lose them and it has some cool quotable moments.

Whilst the song is quite serious it does have a vibrant feel thanks to the production. It’s very disco inspired and will instantly have you wanting to throw on some roller-skates and hit up a skate rink.

On the other hand “Can’t Dance” leans towards her old RNB sound with the addition of a groovy baseline. It has the potential to be really good live but in comparison to “Let You Be Right”, it’s just a little forgettable and annoying. It has a gimmicky delivery that I’m just a little bit over hearing from her. But otherwise this is a very exciting and promising continuation, which could see this upcoming album being her best yet.